Need any help?? write to us at

X
LOGIN
Login to access posts, links, updates, question papers, materials, one liners!
Use Your Email Address/Mobile and Password to Login
Forgot Password?
Not a member? Sign Up
LOGIN WITH EMAIL/MOBILE
Forgot Password?
Go Back
FORGOT PASSWORD
Go Back
RESET PASSWORD
Go Back
Continue with LinkedIn
OR
Fill Up a Simple Form
Already a Member? Login
SIGN UP
Fill all the below details correctly and click on Next
Go Back
c - Tag - questions - EngineersHub
Tag results found for "c" in Questions.

C supports a number of string handling functions. All of these built-in functions are aimed at performing various operations on strings are in the header file string.in

/* A program to caculate length of string by using stren() function */

This function is used to copy one string to  the other. Its syntax is as follows:

Where string1 and string2 are one -dimmensional character arrays.

This function copies the content of strings2 to string1.

/* A program to copy one string to another using strcpy( ) function */

Its syntax is as follows:

This fuction is used to concatenate two strings. i.e.,it appends one string at the end of the specified string.Its syntax as follows:

where string1 and string2 are one-dimensional character arrays.

This function joins two strings together. In other words, it adds the string2 to string1 and the strings1 contains the concatenated string. E.g.,string1 contains prog and string2 contains ram , then string1 holds program after the execution of the strcat( ) function.

/* A program to concatenate one string with another using stracat( ) function */

Reading strings from the terminal:-

(a) formatted input function:- scanf can be used with %s format specification to read a string.

Here don‘t use‘&’ because the name of the string is a pointer to the array. The problem with scanf is that it terminates its input on the first white space it finds.

Reads only NEW (from above example).

(1) getchar():- It is used to read a single character from the keyboard. Using this function repeatedly we may read an entire line of text

(2) gets():- It is a more convenient method of reading a string of text including blank spaces.

Writing strings on to the screen:-

(1) Using formatted output functions:- printf with %s format specifier we can print strings in different formats on to screen.

(a) putchar():- It is used to print a character on the screen.

(b) puts():- It is used to print strings including blank spaces.

In C language a string is group of characters (or) array of characters, which is terminated by delimiter \0 (null). Thus, C uses variable-length delimited strings in programs.

C does not support string as a data type. It allows us to represent strings as character arrays. In C, a string variable is any valid C variable name and is always declared as an array of characters.

The size determines the number of characters in the string name.

There are several methods to initialize values for string variables.

The string city size is 8 but it contains 7 characters, and one-character space is for the NULL terminator.

In C a string is stored in an array of characters and terminated by \0 (null).

If we use a one-character string it requires two locations. The difference is shown below,

The difference between array and string is shown below because strings are the variable-length structure, we must provide enough room for maximum length string to store and one byte for the delimiter.

Why do we need null?

A string constant is a sequence of characters enclosed in double-quotes. When string constants are used in the C program, it automatically initializes a null at end of the string.

printf(" Enter the matrix B values:\n");

print("Enter the Matrix B values:\n");

Enter the size of Matrix A:2

Enter the size of Matrix B:2

Enter the matrix A values:

Enter the Matrix B values:

The Matrix A is

The matrix B is

The Output Matrix C is

In 2-D array we can declare an array as :

In 3-D we can declare the array in the following manner :

/* here we have divided array into the grid for sake of convenience as in above declaration we have created 3 different grids, each has rows and columns */

If we want to access the element in a 3-D array we can do it as follows :

Question
Arunbavu Arun
1 year ago
Explain how two-dimensional arrays can be used to represent matrices? (OR) Define an array and how the memory is allocated for a 2D array?
READ MORE VIEW ALL ANSWERS
#Technology #c
1 Answer(s) posted Write an answer 3507

These are stored in the memory as given below.

Suppose we have an array named arr having 3 rows and 3 columns then it can be stored in the memory in the following manner : 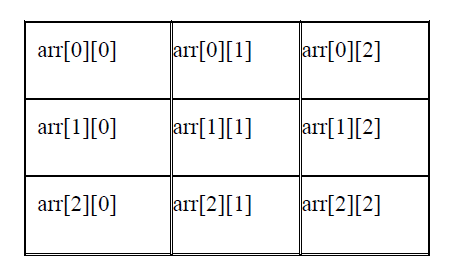 Thus an array of 3*3 can be declared as follows :

and it will be represented in the memory with row-major implementation as follows :

and it will be represented in the memory with column-major implementation as follows :

These are well suited to handle the table of data. In a 2-D array, we can declare an array as :

These are stored in the memory as given below. 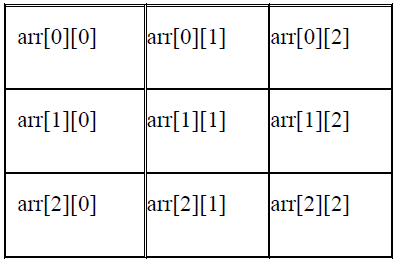 To initialize values for variable-length arrays we can use scanf statement and loop constructs.

of the columns in the array.

above statement can also be written as

by surrounding the elements of each row by braces.

When the array is completely initialized with all values, explicitly we need not specify the size of the first dimension.

If the values are missing in an initializer, they are automatically set to zero.

Will initialize the first two elements of the first row to one, the first element of the second row to two, and all other elements to zero.

Question
Ruchitha
1 year ago
What is an array? How to declare and initialize arrays? Explain with examples?
READ MORE VIEW ALL ANSWERS
#Computers #Technology #c
1 Answer(s) posted Write an answer 3469

An array is defined as an ordered set of similar data items. All the data items of an array are stored in consecutive memory locations in RAM. The elements of an array are of same data type and each item can be accessed using the same name.

Declaration of an array:-

where, n is the number of data items (or) index(or) dimension.

The different types of initializing arrays:

(i) Initializing all specified memory locations.

1. Compile Time Initialization:  We can initialize the elements of arrays in the same way as the ordinary variables when they are declared. The general form of initialization of arrays is

During compilation, 5 contiguous memory locations are reserved by the compiler for the variable a and all these locations are initialized as shown in figure.

Initialization with all zeros:-

Consider the declaration along with the initialization.

The array b is initialized as shown in figure.

Fig: Array Initialized with a String

Even though the string "COMPUTER" contains 8 characters, because it is a string, it always ends with null character. So, the array size is 9 bytes (i.e., string length 1 byte for null character).

An array can be explicitly initialized at run time. This approach is usually applied for initializing large arrays.

Ex:- scanf can be used to initialize an array.

The above statements will initialize array elements with the values entered through the key board.